Posted on: November 30th, 2009 by Webmaster No Comments

I sure like it when people call me to gather cattle. I’ve gotten into gathering bucking bull stock and most of these I gather and pen don’t know fences were built to keep them in. The cows seem to start teaching their calves to jump fences when they’re born. But with my dogs, being that they’re so good, we usually don’t have too many problems. This can lead to being over confident with my dogs and that’s where I end up learning some important lessons!

I guy I know, Ken, called me to help catch 4 calves. I mean give me a break, 4 calves? NO PROBLEM! The day before I left for elk hunting, I loaded my horse badger and my two best dogs, Hanging Tree Sport and Chick, and drove out to meet Ken. When I got there we trapped the cows with grain but the 4 calves wouldn’t come into the pen. Well, we decided to go ahead and load the cows and the bull and then work on getting the calves caught up. I’m not sure why I did it but I attempted to bring the 4 calves into a half mooned pen with the little 4 foot walk gate in the middle.

Heck, we even left one cow in a little pen inside the bigger pen so the calves would come in easily. WRONG! I’m not sure why I tried it this way. We only had about one hour left before dark. As it turned out, I could stop the calves with my two dogs but couldn’t get them into the pen. I finally got one big double-bred scat- cat heifer in the pen but then she tore it down and got out. So I got to chasing these calves with my horse but then he went down in a spring and that ended that! After me, my horse and my dogs were all wore out I told Ken that we needed to quit as it was getting dark. So we had to unload the cows and bull and headed home. 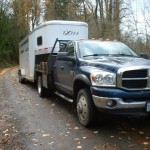 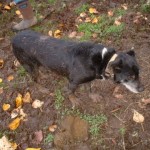 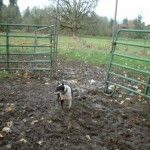 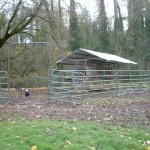 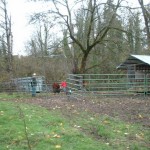 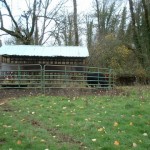 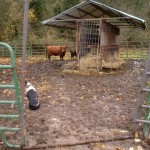 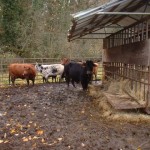 When I got back from elk hunting I called Ken to see if he got the cows and calves penned up.
He said he hadn’t. I hate to lose at anything so I asked him if he was ready to give it another shot and he said he was. We set it up differently this time! We started out at 10.00 am on a Sunday so we would have plenty of day light hours to work. I also asked my son, Jason, if he wanted to come along and help which of course he did (he knows we always have a good time gathering cattle). That Saturday night I didn’t get a lot of sleep because I was thinking about those 4 little calves.

We met Ken and his wife on Sunday morning and Ken asked me how I wanted to do it. This time I told him we’d open a big 12 foot panel, angel it out, then I’d send my two dogs out to hold the cattle up. I believe there were about 5 or 6 cows, 4 calves and one big bull.

Once I got the cattle settled down, Ken dumped grain into the feeders and I started having the dogs move the cattle back to the corral. Some of them went on in but there were a few that wanted nothing to do with that corral. So they kept trying to get around it and Sport and Chick would get them stopped. This lasted for about 2 minutes then they all went into the corral. The cows didn’t want to stay in the corral so they tried to leave but my two great dogs, Sport and Chick, got them stopped. The calves didn’t even try and run – they had enough the last time they meet those two dogs!

We shut the panel but a couple of those cows headed to the back side of the corral hoping to bust their way out. I sent Chick around the outside of the pen and one look at that dog biting through the bars at their head got them stopped.

The heard settled down really nice and the whole process took maybe 5 minutes.

What I learned from these little calves is that you should really think out what kind of dog power you have and set up the situation so you can win! I had plenty of dog power but I should have opened up a panel and brought the whole herd in at one time. I could have even gotten the 4 calves in if I would of opened up a panel at either end of the corral. Because of my mistakes, I thought about those darn 4 little calves the whole time I was gone hunting!

The thing about working dogs with cattle is that you’ll probably make mistakes – you just try to learn from them.